Hit enter to search or ESC to close
News

By FIREFIGHTER X February 1, 2010 No Comments

The incredible story of Holt Caterpillar.

When you need a fire break who are you going to call?

The steam tractors of the 1890s and early 1900s were extremely heavy, sometimes weighing 1,000 pounds (450 kg) per horsepower, and often sank into the rich, soft earth of the San Joaquin Valley Delta farmland surrounding Stockton, California. Benjamin Holt attempted to fix the problem by increasing the size and width of the wheels up to 7.5 feet (2.3 m) tall and 6 feet (1.8 m) wide, producing a tractor 46 feet (14 m) wide. But this also made the tractors increasingly complex, expensive and difficult to maintain.

Two Holt 45 gas crawler tractors team up to pull a long wagon train in the Mojave Desert during construction of the Los Angeles Aqueduct in 1909.

Another solution considered was to lay a temporary plank road ahead of the steam tractor, but this was time-consuming, expensive, and interfered with earthmoving. Holt thought of wrapping the planks around the wheels. He replaced the wheels on a 40 horsepower (30 kW) Holt steamer, No. 77, with a set of wooden tracks bolted to chains. On Thanksgiving Day, November 24, 1904, he successfully tested the updated machine plowing the soggy delta land of Roberts Island.

Contemporaneously Richard Hornsby & Sons in Grantham, Lincolnshire, England, developed a steel plate tracked vehicle which it patented in 1904. This tractor steered by differential braking of the tracks and did not require the forward tiller steering wheel for steering making it the first to do so. Several tractors were made and sold to operate in the Yukon, one example of which was in operation until 1927 remnants of which still exist to this day, but Hornsby was unable to interest the British Military in 1907, although soldiers who witnessed the trials nicknamed the machine a caterpillar. Hornsby, therefore, found a limited market for their tractor so they sold their patent to Holt in 1911, the same year Holt trademarked “Caterpillar”.

Company photographer Charles Clements was reported to have observed that the tractor crawled like a caterpillar, and Holt seized on the metaphor. “Caterpillar it is. That’s the name for it! Some sources, though, attribute this name to British soldiers in July 1907. Two years later Holt sold his first steam-powered tractor crawlers for US$5,500, about US$128,000 today. Each side featured a track frame measured 30 inches (760 mm) high by 42 inches (1,100 mm) wide and were 9 feet (2.7 m) long. The tracks were 3 inches (76 mm) by 4 inches (100 mm) redwood slats.

Holt received the first patent for a practical continuous track for use with a tractor on December 7, 1907, for his improved “Traction Engine” (“improvement in vehicles, and especially of the traction engine class; and included endless traveling platform supports upon which the engine is carried”).

On February 2, 1910, Holt opened up a plant in East Peoria, Illinois, led by his nephew Pliny Holt. There Pliny met farm implement dealer Murray Baker who knew of an empty factory that had been recently built to manufacture farm implements and steam traction engines. Baker, who later became the first executive vice president of what became Caterpillar Tractor Company, wrote to Holt headquarters in Stockton and described the plant of the bankrupt Colean Manufacturing Co. of East Peoria, Illinois. On October 25, 1909, Pliny Holt purchased the factory,[19] and immediately began operations with 12 employees. Holt incorporated it as the Holt Caterpillar Company, although he did not trademark the name Caterpillar until August 2, 1910.

The addition of a plant in the Midwest, despite the hefty capital needed to retool the plant, proved so profitable that only two years later the company employed 625 people and was exporting tractors to Argentina, Canada, and Mexico. Tractors were built in both Stockton and East Peoria.

On January 31, 2017, after more than 90 years of being headquartered in Peoria, Illinois, the company announced plans to move their headquarters from Peoria to Chicago, Illinois by the end of 2017. The upper echelon of executives, including newly installed CEO Jim Umpleby, will begin relocating later this year, with up to 100 employees total moving by year’s end. About 300 employees will work in the new office at an as-yet undecided location once the transition is complete. The company indefinitely suspended planning for the new Peoria headquarters in the fall of 2015 after announcing a restructuring effort that called for up to 10,000 jobs to be cut and about 20 facilities around the world to be closed or consolidated. The changes contributed to $2.3 billion in savings in 2016, but sales and revenue for last year still were more than 40 percent below peak levels of 2012. Umpleby said that decline is a fundamental reason the company’s Board of Directors opted to move global headquarters to an area where the global marketplace is in easier reach.

Use in World War I

The first tanks used in WW1 were manufactured by William Foster & Co. also in Lincolnshire and were introduced to the battlefield in 1916. That company had collaborated with Hornsby in the development of the vehicles demonstrated to the British military in 1907, providing the paraffin (kerosene) engines.

Holt’s track-type tractors played a support role in World War I. Even before the U.S. formally entered WWI, Holt had shipped 1,200 tractors to England, France, and Russia for agricultural purposes. These governments, however, sent the tractors directly to the battlefront where the military put them to work hauling artillery and supplies When World War I broke out, the British War Office ordered a Holt tractor and put it through trials at Aldershot. The War Office was suitably impressed and chose it as a gun-tractor. Over the next four years, the Holt tractor became a major artillery tractor, mainly used to haul medium guns like the 6-inch howitzer, the 60-pounder, and later the 9.2-inch howitzer.

Holt tractors were also the inspiration for the development of the British tank, which profoundly altered ground warfare tactics. Major Ernest Swinton, sent to France as an army war correspondent very soon saw the potential of a track-laying tractor.[28]:116 Although the British later chose an English firm to build its first tanks, the Holt tractor became “one of the most important military vehicles of all time.”[26] 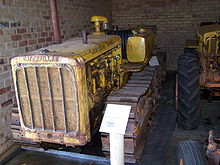 Holt tractors had become well known during World War I. Military contracts formed the major part of the company’s production. When the war ended, Holt’s planned expansion to meet the military’s needs was abruptly terminated. The heavy-duty tractors needed by the military were unsuitable for farmers. The company’s situation worsened when artillery tractors were returned from Europe, depressing prices for new equipment and Holt’s unsold inventory of military tractors. The company struggled with the transition from wartime boom to peacetime bust. To keep the company afloat, they borrowed heavily.

C. L. Best Gas Tractor Company, formed by Clarence Leo Best in 1910 and Holt’s primary competitor, had during the war received government support enabling it to supply farmers with the smaller agricultural tractors they needed.[29][30] As a result, Best had gained a considerable market advantage over Holt by war’s end. Best also assumed considerable debt to allow it to continue expansion, especially production of its new Best Model 60 “Tracklayer”.

Both companies were adversely impacted by the transition from a wartime to a peacetime economy, which contributed to a nationwide depression, further inhibiting sales. On December 5, 1920, 71-year-old Benjamin Holt died after a month-long illness.

A 60-horsepower Caterpillar Sixty being used for road work in the Cibola National Forest, New Mexico, the United States in 1931

The banks and bankers who held the company’s large debt forced the Holt board of directors to accept their candidate, Thomas A. Baxter, to succeed Benjamin Holt. Baxter initially cut the large tractors from the company’s product line and introduced smaller models focused on the agricultural market. When the Federal-Aid Highway Act of 1921funded a US$1 billion federal highway building program, Baxter began refocusing the company towards building road construction equipment.:66 Both companies also faced fierce competition from the Fordson company.

Between 1907 and 1918, Best and Holt had spent about US$1.5 million in legal fees fighting each other in a number of contractual, trademark and patent infringement lawsuits. Harry H. Fair of the bond brokerage house of Pierce, Fair & Company of San Francisco had helped to finance C. L. Best’s debt and Holt shareholders approached him about their company’s financial difficulty. Fair recommended that the two companies should merge. In April and May 1925, the financially stronger C. L. Best merged with the market leader Holt Caterpillar to form the Caterpillar Tractor Co.

The new company was headquartered in San Leandro until 1930 when under the terms of the merger it was moved to Peoria. Baxter had been removed as CEO earlier in 1925, and Clarence Leo Best assumed the title of CEO and remained in that role until October 1951

Caterpillar adopted the diesel engine to replace gasoline engines. During World War II, Caterpillar products found fame with the Seabees, Construction Battalions of the United States Navy, who built airfields and other facilities in the Pacific Theater of Operations. Caterpillar ranked 44th among United States corporations in the value of wartime military production contracts. During the post-war construction boom, the company grew at a rapid pace and launched its first venture outside the U.S. in 1950, marking the beginning of Caterpillar’s development into a multinational corporation.

.{more of the story https://en.wikipedia.org/wiki/Caterpillar_Inc.}